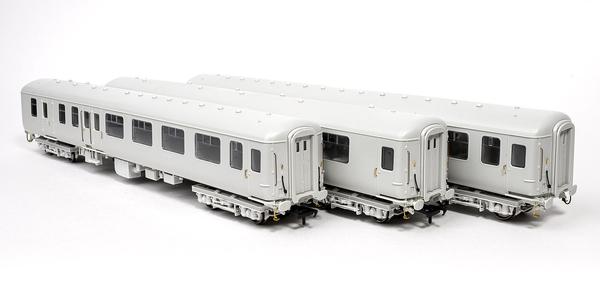 Accurascale is very proud to reveal the latest addition to its well received range of rolling stock, the Mk.2b series of coaches, one of several 'missing link' sub classes that has never been produced in high quality form in 4mm scale. Built at Litchurch Lane, Derby, during 1969, 111 vehicles were built for British Rail to three designs; Tourist Second Open (TSO), Corridor First (FK) and Brake Corridor First (BFK).

The Mk.2b was the third iteration of the Swindon-designed 'integrally constructed' Mk.2 and it saw a number of design changes that resulted in a much more modern appearance over the earlier variants. While the underframe was basically unchanged, the body was lengthened by several inches to provide additional space for planned air-condition upgrades. However, the major spotting feature was the wider wrap-around doors at each corner - with characteristic sausage shaped bumpers - and the removal of the centre passenger access doors. 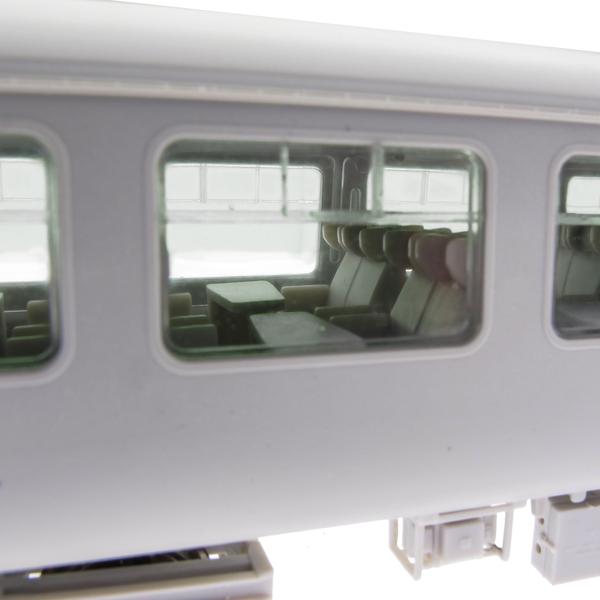 The interior was heavily influenced by the XP64 coaches with greater use of glass reinforced plastic (GRP) in the vestibules and toilets - the former finished in a now iconic deep reddish orange colour that will be forever etched into the minds of enthusiasts from that era. Also new were folding end gangway doors, also finished in the same red. The toilets themselves were repositioned, being moved either end of the passenger compartment on the same side, resulting in two very different looking bodysides.

Operationally they matched the previous Mk.2a coaches with air brakes and dual electric and steam heating. They were also delivered in the same classic BR blue/grey livery, still without Inter-City logos - those came a few years later - and complete with region prefixes to the numbers. Most also gained square destination board holders, although these were removed by the end of the 1970s.

The vast majority of the fleet was initially deployed to the Western Region, mixing it with Mk.2a coaches and Mk.1 catering cars on 'Western' and Class 47-hauled services between London Paddington and South Wales. A small number of FK were also allocated to ECML Inter-City services out of King's Cross, being commonly associated with 'Brush 4s' and the Deltics on trains to Yorkshire, the North East and Scotland.

The introduction of air-conditioned Mk.2 variants on to the WR just a few years later saw the Mk.2b coaches bumped to trains between Paddington, Penzance and other South West destinations, while the ER FKs were cascaded to secondary and inter-regional workings. Around the same time the first Class 50s appeared on the WR, beginning the long association of the later EE Type 4s with Mk.2b coaches.

With new HSTs coming on stream from 1975 the Mk.2b coaches further spread their wings becoming a common sight on Paddington-Oxford/West Midlands/Liverpool diagrams as well as inter-regional and North East-South West diagrams between Cardiff, Poole, Paignton, Plymouth and Swansea to Bradford, Edinburgh, Leeds and Newcastle. From 1978 further HST incursions onto traditional Mk.2 territory resulted in large numbers of vehicles being sent to the South Western main line - 'The Mule - between London Waterloo and Exeter St Davids, with other Southern Region destinations also being served.

By the mid 1980s the fleet was spread across all five regions. The majority were employed on trains out of Paddington and Waterloo - and rapidly gaining the colourful Network SouthEast livery - but significant numbers were allocated to InterCity, Provincial and ScotRail services. Some also gained Trans-Pennine livery for working between Liverpool/North Wales and Cleethorpes/Newcastle/Scarborough. A pair of FKs even joined the Derby RTC fleet in 1987, ADB 977528 and ADB 977529 being used as brake force runners with a wide variety of different test coaches all over the country.

The same period also saw a number of changes to the fleet. The final Mk.2b BFK was taken out of service, joining three others that had been converted as Royal Train support coaches over the previous decade. The other five of the original nine built had already been sold to Northern Ireland Railways in 1980. Meanwhile the majority of first class coaches allocated to non-NSE activities were also considered obsolete, and were downgraded to second class with the new designation SK. Initially used on ECML relief trains the SKs were later transferred to Wolverhampton Oxley for use on cross-country turns between East Anglia and the Midlands and North West, which included the short-lived ‘The Rhinelander’ boat train between Harwich and Manchester Piccadilly.

The 'Sprinterisation' of the late 1980s and 1990s was responsible for the gradual retrenchment of the Mk.2b coaches until only the Waterloo-Exeter, Paddington semi-fasts and a handful allocated to Regional Railways remained. The new Networker 'Turbos' from 1992 and the Class 159s from 1993 brought about the end of NSE loco-hauled, while the last surviving RR TSOs followed shortly after, replaced by ex-NSE Mk.2a coaches!

Fortunately there was a reprieve of sorts just a few years later as the shadow South Wales & West franchise hired in a handful of coaches for various diagrams between Birmingham/Manchester, Cardiff/Bristol and Westbury/Weymouth using EWS Class 37s which ran from 1996 to 1999, with the coaches later being picked up again by Wales & Borders for Rhymney-Cardiff-Fishguard services from 2001-2004, again usually with EWS Type 3 power. Several of these transferred to the West Coast Railways railtour fleet and remain main line registered. Meanwhile, the four heavily rebuilt Royal Train BFKs still see regular use, although two were sold in the early 2000s, joining Network Rail and Riviera Trains.