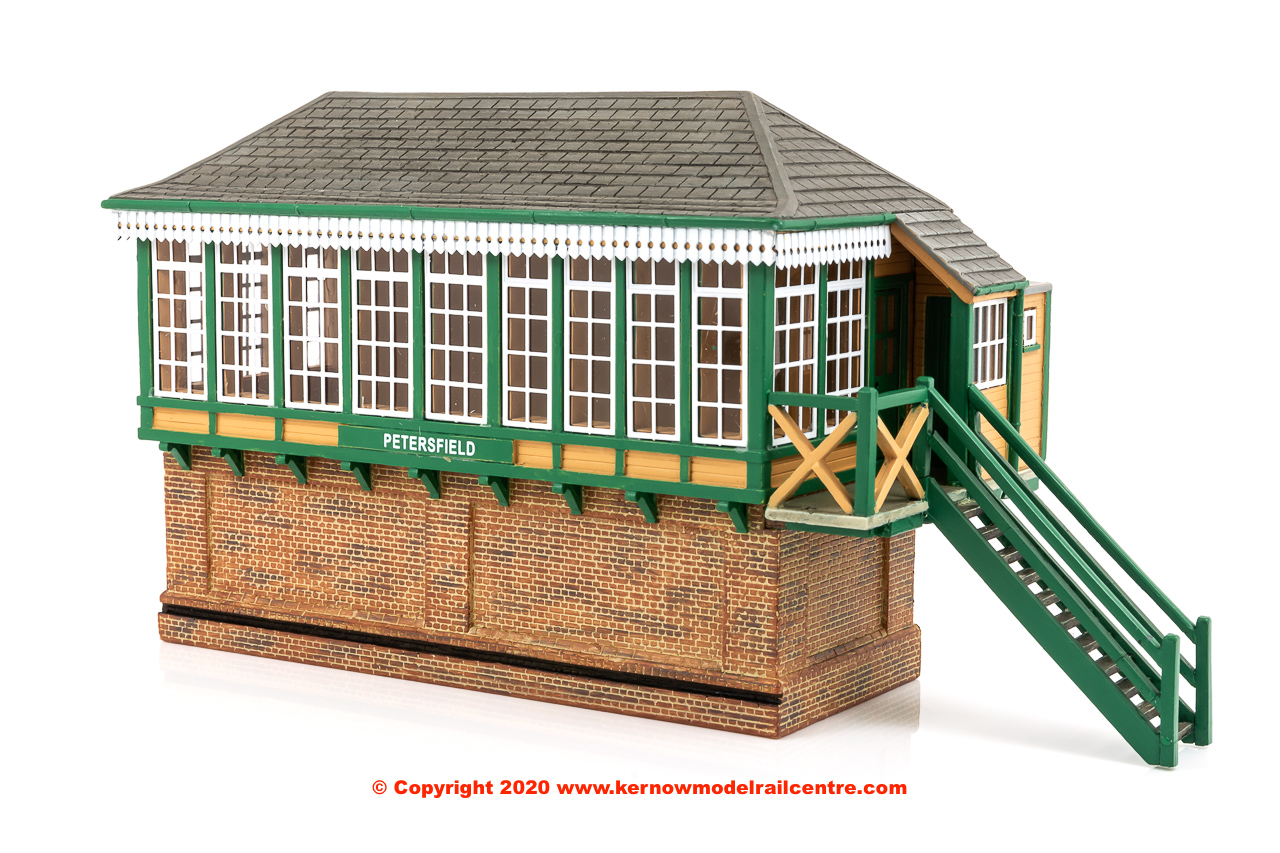 As signalling was developed in the 1870’s the LSWR started to standardise its signal boxes using lever frames and interlocking by Stevens and Sons and a common construction style. The created what was to become known as the Type 1 box. Although standardisation was deployed as can be seen below a number of variations existed and of course the boxes could be with the staircase being built at either end to suit the location and free standing or platform mounted.

These boxes were generally constructed between 1873 and 1878, although some boxes were still built to this design some ten years later.

The timber constructed operating floor area were built on either brick or stone base (housing the interlocking mechanism). It should be noted that the height of the base of the box varied depending on location to afford the maximum visibility for the signaller. The sliding windows were only two panes deep by three or four across. The roof was hipped and slated. External stairs and handrails completed the look.

Constructed between 1977 and 1884 the Type 2 boxes were located mainly in the London and outer suburban area along with a few on the upper end of the Portsmouth direct line. Whilst similar in construction to the Type 1 boxes they offered increased space and increased visibility with larger three pane deep by two or three panes across on three sides of the box. Built on a brick base, although some were originally wooden (but replaced by bricks as a wartime measure) the operating floor was at a standard 8ft height above rail level. Where possible a railed walkway was provided to facilitate window cleaning. They still however did not include lavatories.
For the Ascot and Aldershot line the very similar box design was classified as Type 2a

The windows were further enlarged now three or four panes deep reaching almost down to floor level and other than Type 3a were fully glazed across each end. The type 3 and 3a also had a row of top light windows above the main windows. A wooden porch was provided at the top of the stairs.

Our example the Petersfield type 3a signal box was built c1885 and is located on the Portsmouth Direct Line between Havent and Guildford (where of course the 2nd Kernow Model Rail Centre store opened in 2019). Petersfield station was opened by the Portsmouth Railway in 1859, it was leased by the London & South Western Railway, who bought it outright in 1861. The station was extended and enlarged in 1864 to accommodate the traffic from the new Petersfield Railway to Midhurst. 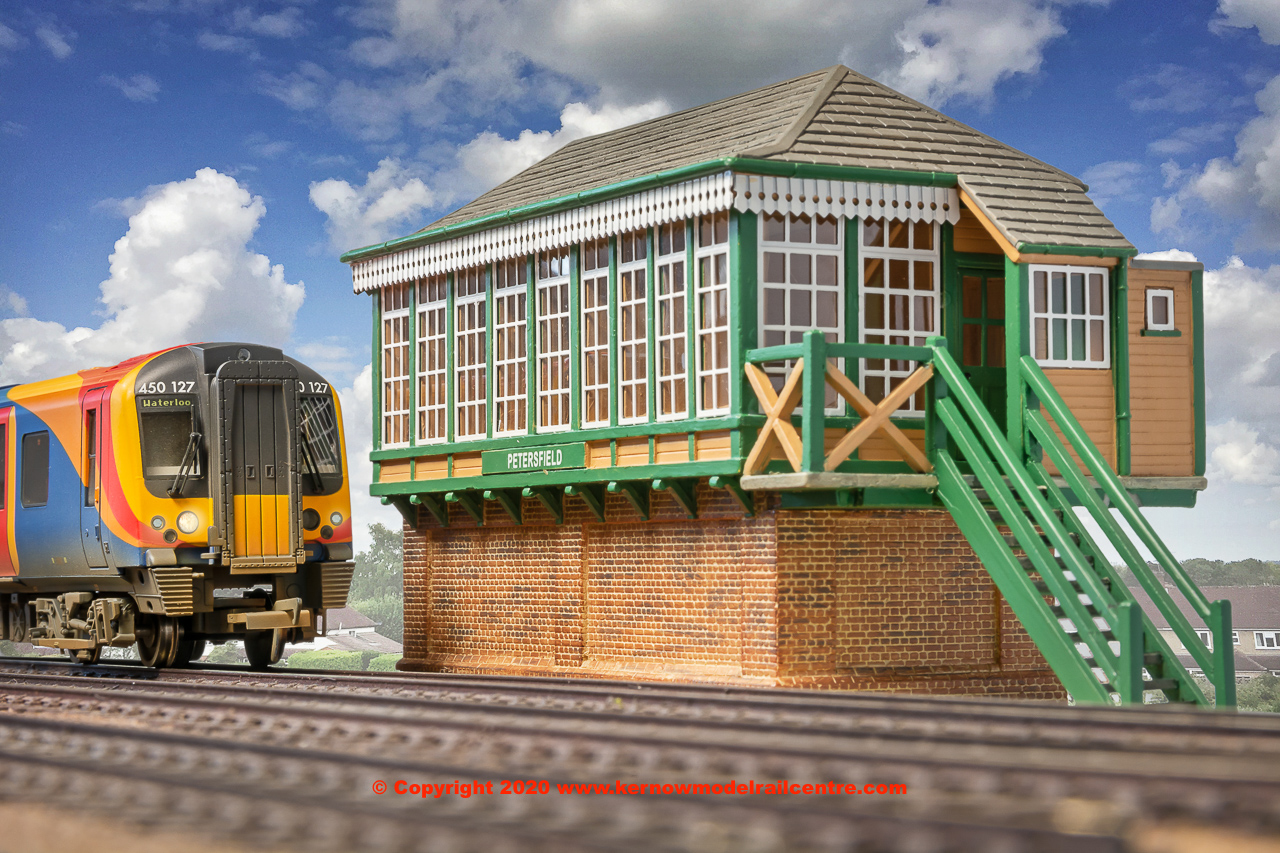 The box is unique as it combines features of both ex LSWR type 2 and type 3 designs. It protects the Station Road level-crossing and it formerly controlled the junction of the Midhurst branch that was closed 1955. Although the closure of the goods yards occurred during the 1970s, the volume of passenger traffic and the need to guard the busy level-crossing has ensured that the signal box has remained in operation. It still contains a ten-lever Stevens (Railway Signalling Co.) frame and locking rack (c1880), together with a circuit diagram, block shelf and block instruments.

These boxes were distinctively different from the previous types as were also of brick (although some were also stone construction above the operating floor level and sliding windows, each with four panes, were grouped at the corners with a brick or stone pillar in the middle (this area was generally obscured from the signalman’s view by the shelf for all the block instruments). As well as porch at the top of the stairs a landing the full width of the box was provided. The Type 4 was widespread and built in all sizes. Variations included the Type 4a with windows in all four corners, whilst Type 4b omitted the central brick pillar. Although our version of the Type 4 box is based on the one a Bude the model can be utilised for many other locations by a simply creating a new signal box name plate, made easier by the fact the ‘Bude’ nameplate is separate item. These locations, with the staircase at the same end as Bude, included Peasmarsh Junction (even closer to our Guildford store), Padstow, Fairfax Road, Holton Heath, Hewish Gates, Stalbridge on the Somerset and Dorset Joint Railway and even some on the Midland and South Western Junction Railway at Swindon Town.

The characteristic small wooden huts and gave protection to small ground frames, where full signalling is not deployed, that would otherwise be open to the elements. Following the LSWR standardisation these huts could typically be found at small junctions or yards where a full size signal box was not required. As with the Bude box above these can be easily customised by simply replacing the nameplate.